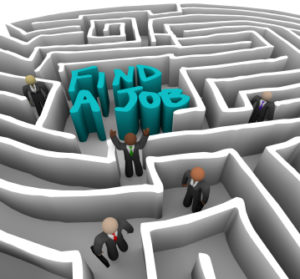 I caught an interesting broadcast a few weeks ago on Ideas, a radio program hosted by Paul Kennedy on the CBC.   It was about the increasingly ‘precarious’ nature of work, as it’s being described these days.

David Weil, a former Barack Obama appointee on labour standards, was recently in Canada delivering an address to a labour law conference on the “fissured workplace”.   What is a fissured workplace?  Good question, as according to the Weil, it is becoming our new normal in the increasingly globalized employment environment and is contributing to a widening income gap between the rich and poor.

In his lecture, Weil used the example of the Marriott hotel chain, where top executives, charged with protecting and enforcing the hotel’s branded experience, don't run the individual hotel properties.  As ‘employment is messy’ as Weil says, these execs kick these brand standards down the line to contracted, staffing agencies, subcontractors, and service providers who employ the workers.

Basically, all the ‘dirty work’, even the physical ownership and maintenance of the properties, is handled by nebulous organizations such as private equity funds, which have no desire to operate a hotel property. Everything from meal service to the cleaning staff is subbed out.  The only people with company jobs, good benefits, and out-sized pay packages are the most senior managers and executives.  Everyone else is under increasingly competitive pressure for time, and for fewer and fewer relative dollars.  As Weil has observed first-hand, often the first things to go are the labour standards.

Who does one hold accountable for this culture? Not the companies, surely.  They’re the ones that have shareholder that they’re accountable to; companies are increasingly focused on their core competencies, pushing the labour element further and further away and removing as much operational liability as possible.

Weil provides a stunning comparison as an example.  Google execs get the compensation, the benefits and perks that follow with employment at the company.  The person driving the Google bus to and from the employee parking lot is sub-contracted and doesn’t participate in the economic rewards of Google, unless he/she’s a shareholder, of course.   Perhaps they get to keep the T-shirt.

So what?  Isn’t that the way of the world?  Increasingly, yes.  But it didn’t used to be that way.  As the broadcast illustrates, companies used to employ everyone, from the CEO to the lowest rung of the ladder.  All the benefits, pensions, work safety, and compensation were shared, although surely not in equal measure, as the company prospered.  It was also easier to ‘start at the bottom’ and work your way to senior management.  With the fractured structure of the various functions and labour tiers, these opportunities are evaporating. 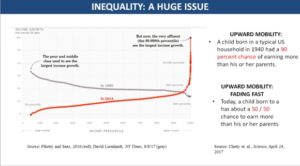 If every company follows the model of the Marriotts and the Googles of this world, the societal implications are huge.  There was a time, albeit brief in relative terms, when you would do better financially than your parents, and your offspring could reasonably expect to do better financially than you.  With the radical change in income inequality that has occurred in recent years as shown by the chart above, that outcome has been reduced to a coin toss – 50/50.  Have a listen. You can listen to the broadcast here.   If you don’t see the direction the bus is coming at you, you end up as road kill.